The vertical axis is percentage of total demand (with ratings used as a rough estimate of rentals), and the horizontal axis is the popularity rank of the DVD titles. Between 2000 and 2005, the Netflix selection grew from 4,500 DVDs to 18,000, and the effect on the demand of this increase in variety is shown above.

Seen at The Long Tail

Thanks for posting this*.

Chris Anderson misses a huge point: the shift in demand is due to the Netflix recommendation system. People did not become magically more eclectic and less interested in new releases in 5 years. The recommendation system is built with one goal in mind: encouraging customers to rent older movies they will like to shift demand away from new releases in order to reduce the amount of new releases Netflix needs to purchase upfront (and be stuck with 3 months later).

So Netflix’s goal is to distract you into choosing an older movie over a new release, because that allows them to distribute that demand over their entire inventory.

Interesting data! Yes, I’d agree that’s Netflix’s goal (to shift demand down the curve for distribution efficiency) but I’d bet their customer approval is rising as well, so perhaps they are ‘allowing’ people to deviate from the herd. Either way, interesting stuff. 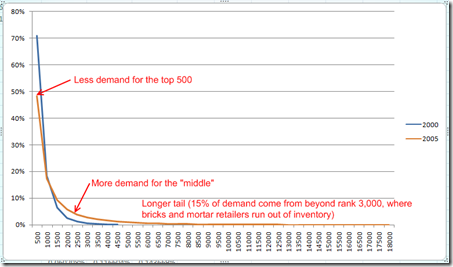 debugging is twice as hard as writing the code in the first place. Therefore, if you write the code as cleverly as possible, you are, by...

debugging is twice as hard as writing the code in the first place. Therefore, if you write the code as

thegongshow: Internet pundits are (rightfully) really excited about this PhotoSketch demo where you draw stick figures, and it generates...