robgo: I was a huge fan of comic books growing up, but what I always found amusing is that there tended to be certain archetypes of super heroes that would

I was a huge fan of comic books growing up, but what I always found amusing is that there tended to be certain archetypes of super heroes that would keep showing up.  For example - the “simple-minded strong dumb guy” is well represented by the Hulk, The Thing, Collossus, and Mr. Incredible.

So for fun, I thought I’d share a few archetypes I often think about.  Some of these come up regularly in NextView discussions. So here they are:

Some folks call these “pied pipers”.  In a resource constrained company, building a team is incredibly difficult when you have limited financial resources, stability, and certainty about the businesses future.  But there are truly remarkable entrepreneurs out there that a) bring with them excellent teams that are deeply loyal to the founder or b) are really amazing at developing a company culture and a story around the business that makes great people gravitate towards them.  This is critical both in the early stages of a company, but also in the later growth stages of the company where the financial reward might not be as significant.  Companies like Twitter are just black holes of talent, and the roots of that culture were set very early on.

The “Force of Nature”

I think we all know folks like this.  They just do whatever it takes to get things done, and pity the fool who gets in their way. Investors like this archetype because they are decisive, are usually really good at selling and closing, and instill a hard driving and intense work ethic in their companies. These folks are particularly important when a company’s early success is dependent on some very hard-to get deals or customer relationships that mere mortals would be too intimidated to pursue.

Note that in the image below, I used the Grey Hulk, who unlike the Green Hulk was actually very smart, but had a bad attitude.

Early stage companies end up pivoting all the time - whether it’s the business model, customer segment, or something else.  Some great entrepreneurs are especially adept at entrenching themselves in interesting markets and quickly gravitating towards areas of promise.  These are the entrepreneurs who look like fast followers, but in my opinion are leaders in disguise.

These entrepreneurs are especially effective in rapidly evolving markets or in grabbing hold of markets that are exploding (ie: social gaming, online ad exchanges and DSP’s, etc).  These are the kinds of entrepreneurs that investors think will “figure things out” and will spend capital wisely in that process.

One of the entrepreneurs we’ve backed calls certain folks “knife fighters”.  This is a great archetype for early team members, maybe more so than founders.

Often, you’ll hear of companies with great executive leadership that fail in early stage situations because they are used to operating with large budgets, a staff, an assistant, a strong brand behind them, etc.  Then you hear about a competing company with unproven but scrappy 20-year-olds that have an unbelievable level of output and somehow crank out double the output with 1/5th the staff.

Or another example - some companies have very well groomed, high-brow Chief Revenue Officers or Marketers who struggle to deliver meaningful traffic or monetization in the early days of a company.  Then you hear about a guy who looks like a dwarf, stares at his computer all day, and somehow gets 200K uniques to a brand new site.  Sure, some of this traffic may be low quality, but sometimes, you need to knife-fight your way to early scale for more traditional, high-brow customer acquisition tactics to start working.

Thoughts?  Any other archetypes you see and admire among entrepreneurs that you know?

I’m a sucker for super-hero startup/technology analogies, and this fun post by Rob does the trick.

I’ll add one to the mix: the “Seer”, represented by Professor Xavier. The Seer has an uncanny, nay, psychic ability to see the opportunity nexus created by current seen, and unseen, trends. This is the entrepreneur that tells his story freely, and when the time comes and those trends converge, the Seer’s company is there and capitalizes on it with such precision, one wonders how he saw this outcome so clearly. 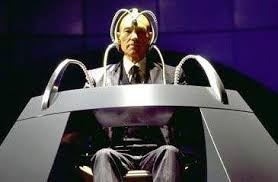 I think this type of entrepreneur is thoughtful, and exceedingly rare. Certainly, you can only identify Seers ‘after the fact’ (success bias anyone?) In general, I prefer those that have skills that can be learned or emulated, however, when you meet a Seer, it’s awe-inspiring & just a little supernatural.

You Are Not So Smart

giantrobotlasers: Portal 2 - Propulsion Gel. This makes me swell with the joy of being alive. "Do you know the biggest lesson I learned...